The winery’s roots go back to 1809 when Auguste Moreau built a cellar across from the Champs Gain vineyard and farmed his few hectares of Chardonnay and Pinot along the golden slope. The 1930s saw an expansion of the family’s vineyards under the guidance of Marcel Moreau.
Roughly 80% of the domaine’s current vineyard holdings were acquired by Marcel. At age 14, Bernard Moreau took over the vineyards and cellar in the early 1960’s. In 1977 the reputation of this great estate was fully established under the leadership of Bernard and Françoise Moreau and the winery was named Domaine Bernard Moreau. In addition to the changes in equipment, farming and winemaking, they also purchased additional land bringing the vineyard total to 14 hectares. To help with winemaking, viticulture and sales, sons Alex and Benoît joined the Domaine after having worked in New Zealand, Australia and South Africa. Alex and Benoit loosely split the esponsibilities of the operation with Benoit more focused on the vineyards and Alex more focused on the cellar.
As with most all great Burgundian estates the emphasis at Domaine Moreau is on terroir. Treat the vineyards right and they’ll reward you ith superior fruit. To maintain healthy balanced soils the winery uses organic fertilizers and no pesticides. To ensure greater flavor intensity they farm the land for lower yields through pruning, debudding, green harvesting in August, leaf thinning for Pinot Noir (on the morning sun side), and the planting of cover crops in certain vineyards to encourage competition and soak up moisture.
The 1er Cru Chardonnays are barrel fermented and aged in French oak barrels (10%-30% new). The wine spends between 12 and 18 months in wood with a little lees stirring early on for added texture. Says Bernard, “The spirit of our winemaking is to not touch the wine too often. For Chardonnay our aim is to produce very clean and precise wines which are not too austere. We like the minerality and purity.”
The red wines are aged in French oak barrels (10%-50% new) for 12 to 20 months depending on the vineyard and vintage. Bernard states, “For our Pinot Noirs we don’t do any racking, fining or filtration. We want to make the purest expression of the Pinot Noir from our vineyards.”

Alexandre Moreau said that the 2018 "growing season was relatively straightforward to manage because even though the spring was very wet, the summer was dry and hot so there wasn't much in the way of disease pressure. As we approached the harvest though maturities really spiked so it was critical to choose the picking dates with care. Also, despite the fact that we started on the 30th of August, which historically is super-early, I was still afraid that the fruit would be too ripe. Happily, as it turns out, that wasn't the case but I confess to being very worried about it. While we could see that there would be very good yields, the volumes still surprised us as there was a lot of juice in the berries. This was particularly true in our old vines where good yields are between 35 and 38 hi/ha but we obtained 50 hi/ha and we've never seen that before. Overall, our yields in white were between 50 and 55 hi/ha though much less in pinot. We used around 25% whole clusters for the vinifications and had no problems with the fermentations finishing. In white however the alcoholics took a long time to finish, which isn't a problem other than you have to watch things carefully. As to the wines, perhaps the most surprising thing about them is how well they transmit their respective terroirs. Very ripe years normally minimize that but the 2018s are really quite transparent."

Read more about our burgundies 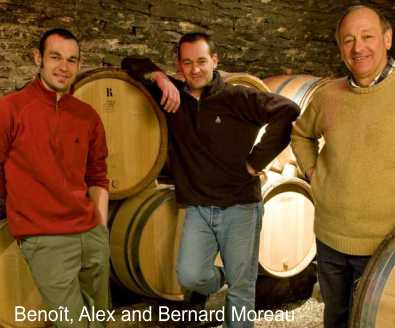 Zoning in on specific appellations, I would not single out any particular one as being superior to the rest. However, I do want to draw readers’ attention to two growers in Chassagne Montrachet who are “killing it” at the moment. Firstly, there is Alex Moreau at Domaine Bernard Moreau. This is a domaine whose wines have risen to a whole new level in recent years. Moreau’s portfolio is a veritable tour around Chassagne’s Premier Crus, showcasing the nuances between climats on the flatter lower sectors and more limestone-rich parcels located on higher contour...